Why is Paw Friction so important? A Veterinarian’s View: Part One 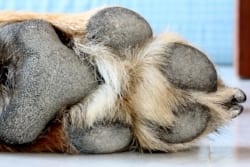 The underside of a dog’s foot is built for traction.

We have received a few questions about what exactly gives a dog traction: is it the paw pads or the claws/toes and why is PawFriction the best product to help stop sliding on hardwood and other smooth floors? The answer to that question depends very much on what your dog is doing at the time. The paw pads are constantly giving the dog traction; stopping all forms of sliding and slipping. The toes/claws act as rudders, stabilizing the dog when they are running or turning by virtue of being able to dig into the environment (such as dirt). 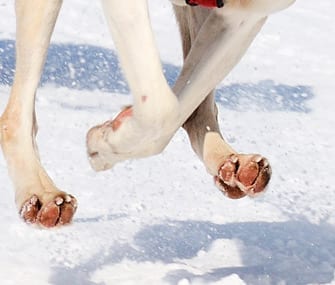 Look at this image of a dog with trimmed nails running. The nails barely even contact the ground. This is even on a slippery surface, no nails needed!

There are many blogs out there that claim the toes/nails are responsible for most, if not all the traction, and have claimed that products used to increase paw pad traction are flawed in their mechanisms. This is absolutely, 100%, not the case at all. However, you don’t have to take our word for it, we have a tendency to be biased…so let us go to the experts!There was a recent study released that is in the process of peer review. It is the first study that has actually looked at the physics of the paw pads, how they work, and the response of the paw pads in changes to pressure. In it, they took two dogs who passed away of natural causes and did histopathology of their paw pads to look at the structure of the many layers.  What they determined is that the outside layer of the paw pad was composed of thousands of “spikes” of tissue. These spikes are biomechanically adapted to increase traction. Here is a section taken directly from their study: “The bottom part of the stratum corneum is in direct contact with the ground surface during locomotion, and is composed of the hardest material (Young’s modulus E ≈ 6MPa, Luboz et al., 2014) among all the three layers presumably to endure the tremendous pad-ground wear, friction and impact during locomotion (Meyer et al., 1990; 271 Luboz et al., 2014).” (Maio et al. 2016).
Here is a link to the paper if you would like to read it: https://peerj.com/preprints/2340.pdf

Take a look at the “papilla” present on the paw pads. All those little spikes are designed to give your dog’s feet traction.

We aren’t arguing that the toes grip and help with traction but this is biomechanically only import when dogs are trying to run and turn abruptly or when they feel like they are slipping; they react by trying to sink their nails into whatever they are standing on. Let us look at the paws like they are shoes. The sole/tread does the bulk of the work in everyday situations but, when added traction is needed, you add cleats to help grip the dirt…but you wouldn’t wear cleats every day, right? We have created flooring (wood, tile,etc.) that significantly reduces the friction when anyone walks on it. Dogs don’t slip on grass and gravel, right? Because those substrates provide increased friction and allow the dog to sink…this is why we all slip on ice; loss of friction.